Memories of 2020 preserved through film & poetry. 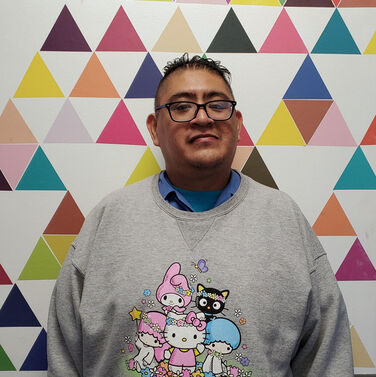 Nikolai Garcia sleeps in Compton, CA; works with homeless youth in East Hollywood; and is Assistant Editor for Dryland, a literary arts journal born in South Central Los Angeles. He has been published in Zocalo, Cultural Weekly, Huizache, Drunk Monkeys, and various literary journals and anthologies. His first chapbook, Nuclear Shadows of Palm Trees, was published in 2019 by DSTL Arts. He is currently at work on his second manuscript. Sometimes he makes friends on social media: @hellokommie

Curator's Message: "Photography and poetry are cousins. They are related in that, when done correctly, both can capture a moment in time that leaves an impression on the viewer/reader. To me, the task of co-curator was the opportunity to help facilitate a big family reunion of relatives that have never met each other before. The reward is in enjoying two art forms complement each other, making them stronger, and hopefully leaving the viewer/reader, with a lot to think about." -Nikolai Garcia 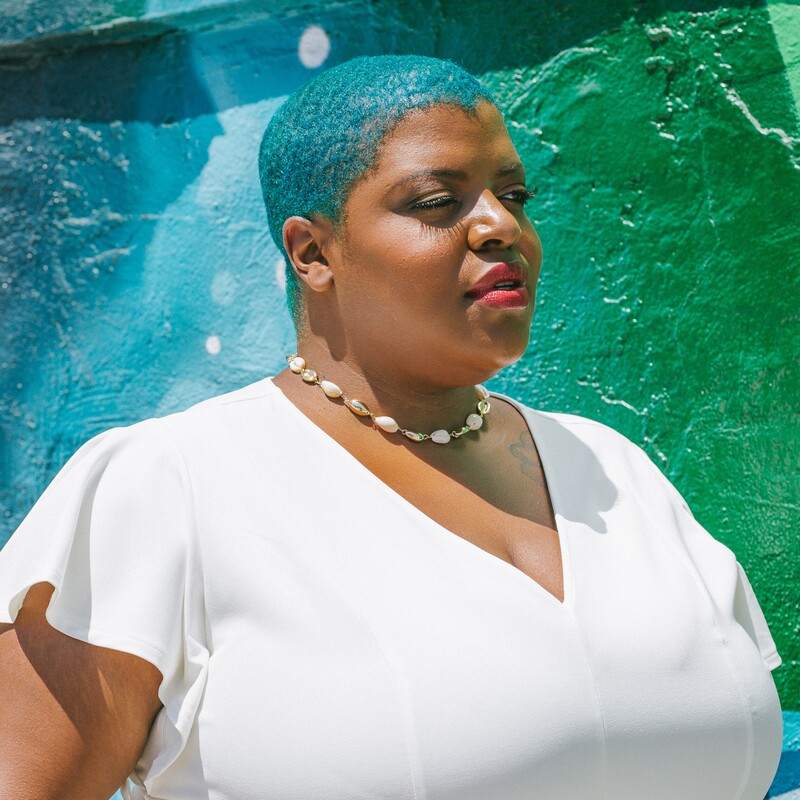 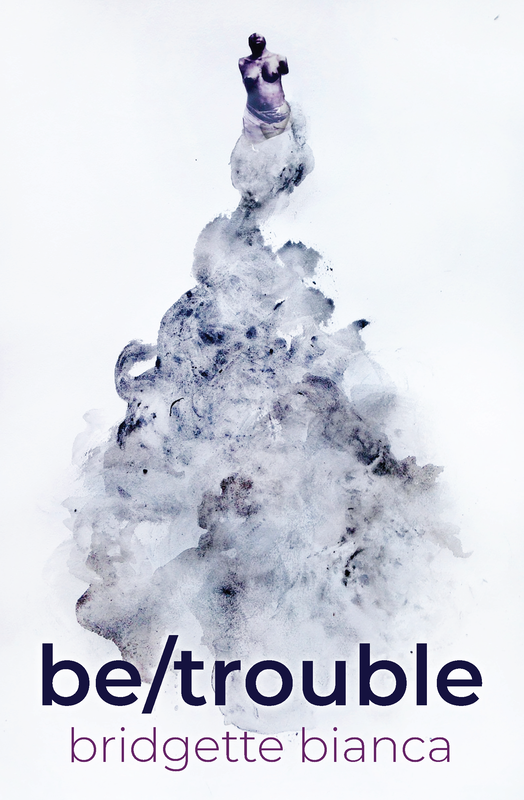 be/trouble, book of poetry,
theaccomplices.org/portfolio/be-trouble-by-bridgette-bianca
bridgette bianca (she/her) is a poet and professor from South Central Los Angeles. Her debut book, be/trouble, was published by Writ Large Press/ The Accomplices in 2020. 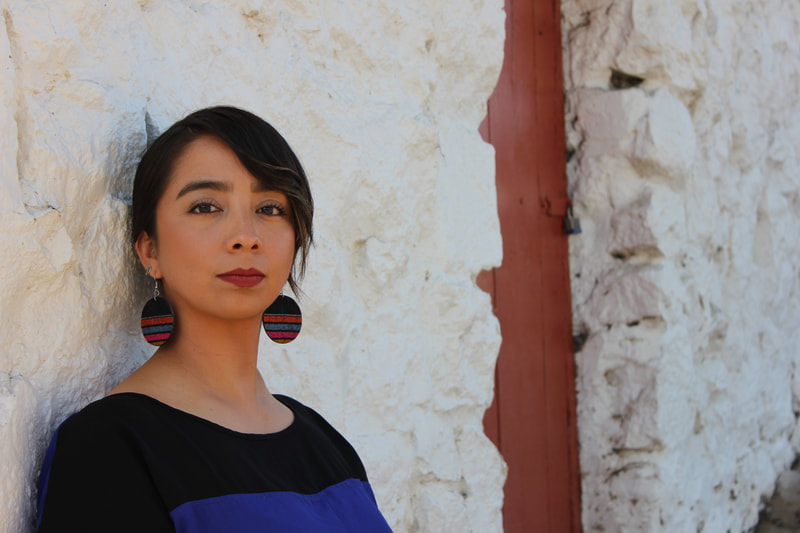 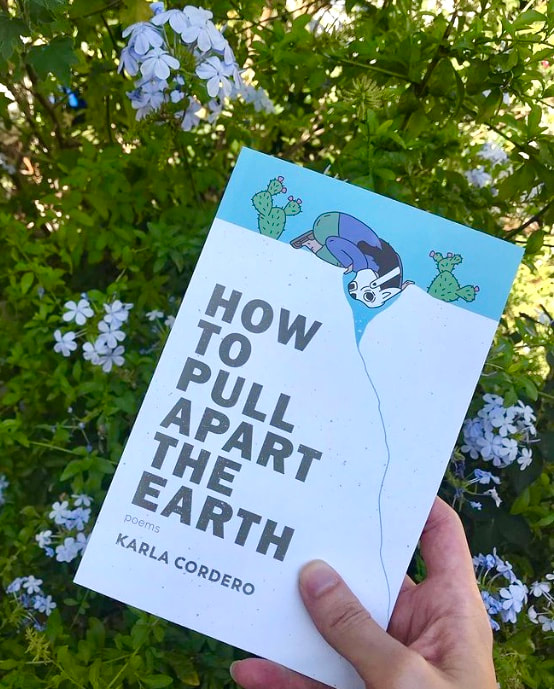 How To Pull Apart The Earth
notacult.media/books/p/earth
Or send Karla a direct message on IG to receive a signed copy.
Karla Cordero (she/her) is a descendant of the Chichimeca people from Northern Mexico, a Chicana poet, educator, and ARTtivist, raised along the borderlands of Calexico, CA. She is a three-time Pushcart nominee and offered fellowships from VONA, Macondo, CantoMundo, The Loft Literary Center, and Pink Door Retreat. Karla teaches creative writing and composition at San Diego City College and MiraCosta College, receiving recognitions such as the San Diego State University Global Diversity Award and Associate Faculty of the Year for education and social justice.

Karla is the editor of SpitJournal an online literary review for poetry and social justice and the CFO and Social Justice Equity Coordinator for the non-profit Glassless Minds, an open mic venue in Oceanside, CA, serving historically underserved youth. Her poems have appeared and forthcoming in The BreakBeat Poets Volume 4. LatiNEXT Anthology, PANK Magazine, Latino Book Review, among other publications. Karla is the author of the chapbook, Grasshoppers Before Gods (Dancing Girl Press 2016) and her first full length collection titled, How To Pull Apart The Earth (NOT A CULT. 2018) is a 2019 San Diego Book Award winner and awarding-winning finalist for the 2019 International Book Awards and 2020 International Latino Book Awards. You can follow her work @karlaflaka13. 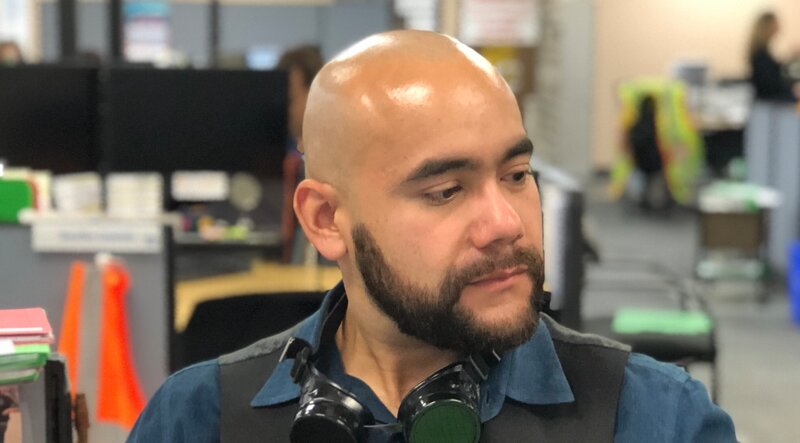 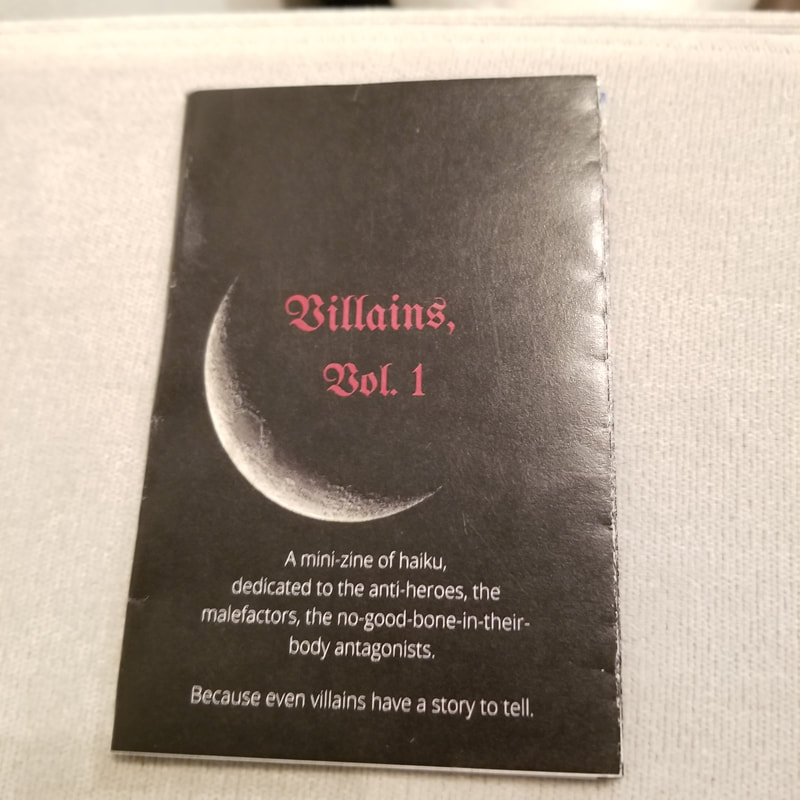 Villains, Vol. 1
A mini-zine of haiku, dedicated to anti-heroes.
DM on IG to purchase a copy.
Mauricio 'Soul on Fire' Moreno (he/him) is a 1st generation Colombian-American artist and writer, originally from Elizabeth, New Jersey. He moved to California to fulfill his life mission of being a writer and sharing the stories of others to bring readers closer together and heal the world.

His work has been published in Conchas Y Café, a Los Angeles-based quarterly zine published by DSTL Arts, as well as Intercultural Press, The Pandemic Poetry Anthology, Resurrection Press, and No Tender Fences.

He is currently working on a novel and is also in the process of publishing his first collection of poetry.

When he is not writing, he can be found somewhere in the desert, or Long Beach saving stray pets with his wife.

Based in Long Beach, CA. 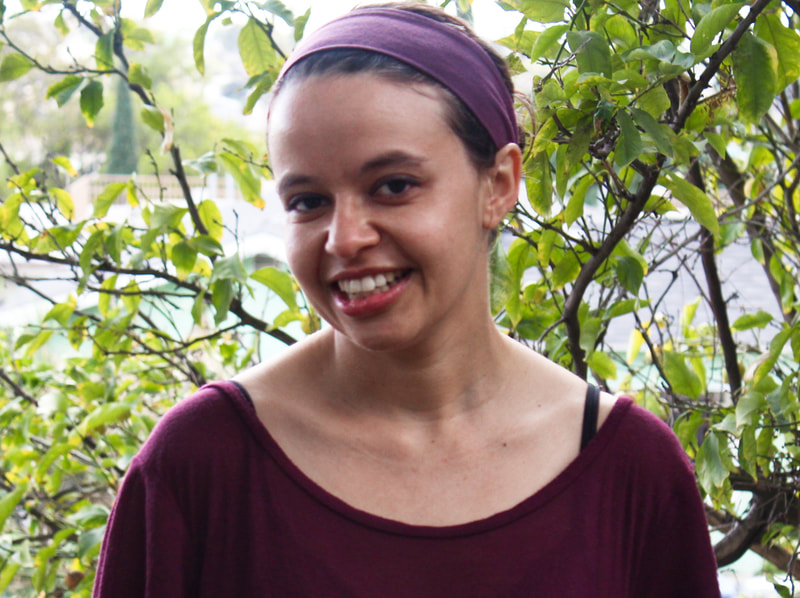 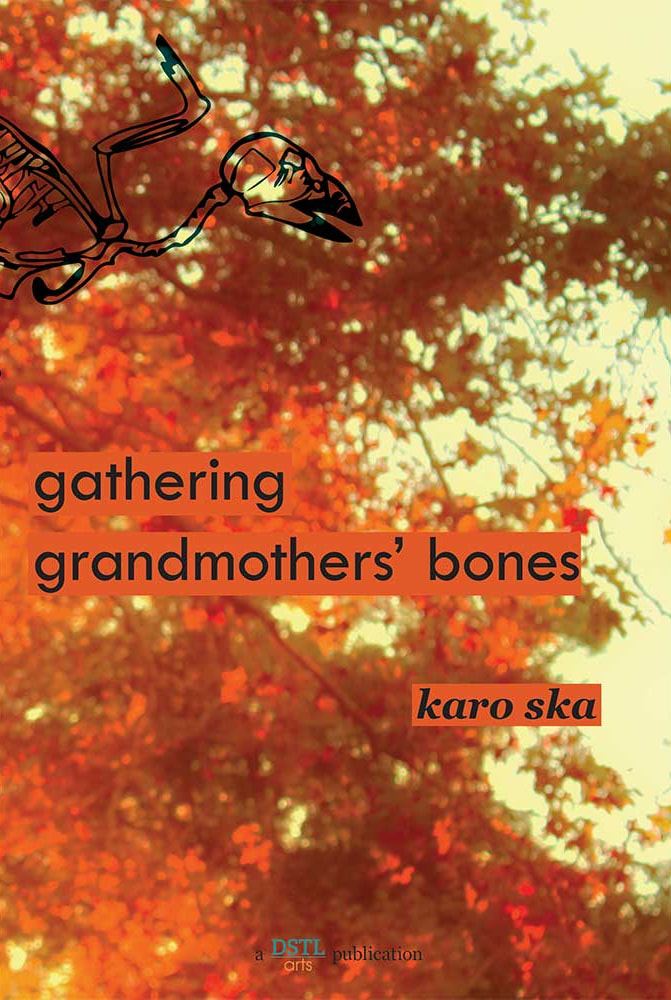 gathering grandmothers' bones
karoska.com/book
Karo Ska (she/they) is a South Asian & Eastern European non-binary femme poet, living on occupied Tongva Land. They migrated here in 1996 from Warsaw, Poland. Anti-capitalist & anti-authoritarian, they find joy where they can. Some of their other work appears in Dryland Lit, Resurrection Magazine, the Intercultural Press, Marías at Sampaguitas, and Ayaskala Magazine. Their first chapbook, "gathering grandmothers' bones" was released on February 29th, 2020. For updates, follow them on instagram @karoo_skaa or check out their website karoska.com. 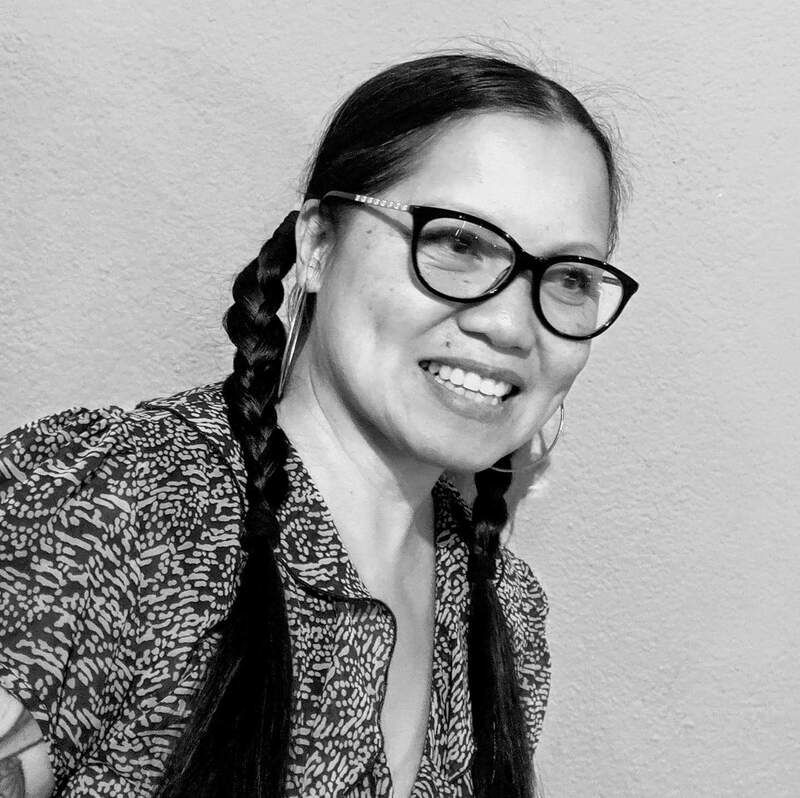 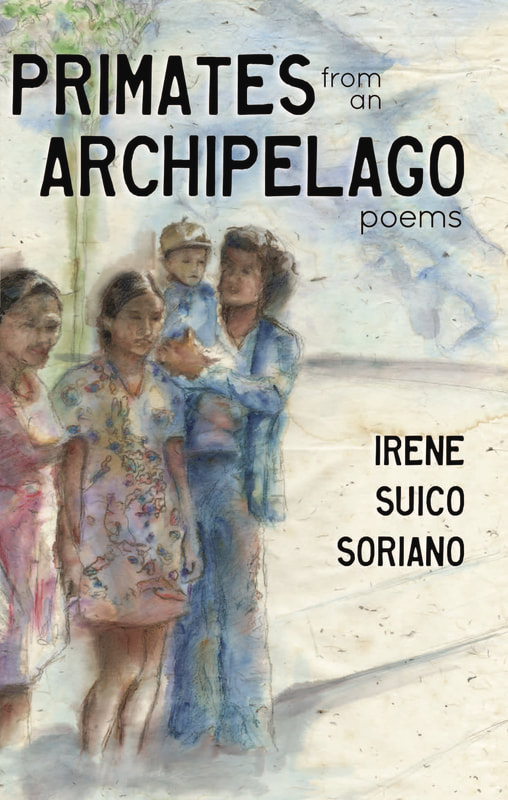 Poetry collection "PRIMATES FROM AN ARCHIPELAGO"
Born in Zamboanga, Philippines in 1969, poet and independent film & literary curator Irene Suico Soriano (she/her) immigrated to the United States in 1981. She is the author of the poetry collection, Primates from an Archipelago (Rabbit Fool Press, 2017) and Safehouses (Disorient, 1998). Irene founded LA’s first Asian Pacific American literary reading series Wrestling Tigers at the Japanese American National Museum and coordinated the series from 1994- 1998. She was featured in the LA Times in 2000 for her role in co-curating the NEA funded World Beyond Poetry Festival that featured over 100+ poets from the diverse communities of Los Angeles. She has curated film programs for the Echo Park Film Center, Filipino American National Historical Society and has served in various film festival shorts programming committees including the Los Angeles Film Festival, Film Independent, Outfest and the Los Angeles Asian Pacific Film Festival. Irene will be the Artist/Activist-in-Residence at Pitzer College's Intercollegiate Department of Asian American Studies in the Fall of 2021 and will be co-teaching a Diasporic Filipinx Aesthetics and Poetics class with Professor Todd Honma. Mum to Max (schnoodle), partner to Evan, all three call the San Fernando Valley their home. #adoptdontshop #endoflifepetdoula #antivivisection #blm

Based in San Fernando Valley, CA.


About Primates from an Archipelago:
(Rabbit Fool Press) $20
In this cinematic collection of poetry, Irene Suico Soriano unravels threads of silence and oppression. Primates from an Archipelago traces lineages on geographic and personal islands where memories and dreams are synonymous. Balanced with official documentation such as passports, birth and death certificates, and membership cards, the poems also speak the languages of uncertainties and multiple truths. The collection travels from homeland exile and loss in the Philippines, to the author’s origin story in Zamboanga, on to sites where experience and education have shaped her world view, and finally to Los Angeles, the city of settlement and fractured pasts. Mythical and intimate, Primates from an Archipelago illustrates the sad beauty that lies in the gaps. To order, email poet at irenesuicosoriano@gmail.com

Brian Braganza (he/him) is a visual artist and musician originally from Los Angeles and is currently working out of New York City. Growing up in a Salvadoran and Filipino household and being drawn to LA's rich history of countercultural music scenes, Brian draws inspiration from the urban to the suburban, from the multicultural to the subcultural — and everything in between. In New York, he works across multiple mediums — music, zine making, photography, and writing — to contribute to New York's Fil-Am punk scene.